Britain is known in fashion for iconic designers and brands, such as Alexander McQueen, Burberry, Paul Smith, vivienne Westwood or Stella McCartney, but also for legendary models, such as Kate Moss, Naomi Campbell, Twiggy or Lily Donaldson, and these are just a few names that make headlines! Suki Waterhouse is a rather new model on the horizon, but she is already rising to the public’s expectations, and landing ELLE UK’s January cover is quite a big deal. She is cute, very British and she is a face for Burberry, helping the launch of their new fragrance in October 2013.

She did not only land the cover of ELLE, but a full editorial. The photos look British, I am pretty sure they were shot in London and she looks like a 60s fashion icon. Perfect round eyes, cat-eye make-up, teased hair and wonderful clothes. The spread, shot by David Vasiljevic, known for his impeccable photographs, could not have been better to capture Suki’s beauty and artlessness.

We all know that in Britain you can rarely find extreme winter weather, excepting for the North probably, so the autumnal glow of these photographs matches the weather outside in London, right now. It is mesmerizing how the cold wind, blinks of sun and clouds are caught in a spread. 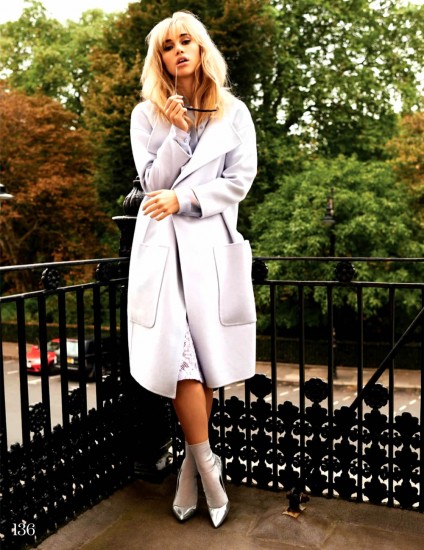 She also did a short movie for Elle UK, and you can watch it here.